Two years ago Jovino Caldeira Coutinho had had enough.

After living in the United States for 11 years, the 45-year-old construction worker decided to pack up and head back to his homeland, Brazil.

With the US housing market in depression, demand for his construction and demolition business had dried up.

Mr Coutinho now runs a construction firm in a beach city near Sao Paulo, and says he has more work than he can handle alone.

“It was really bad (in the US). I have friends over there with no money to come back, working without getting paid,” Mr Coutinho told BBC Brasil. “I told one of them to give up on the money, he’ll get plenty of work here.”

“There were so many restaurants and business closing there”, says Ms Roberts, an environmental educator and documentary maker. “But nothing is slowing down here.” 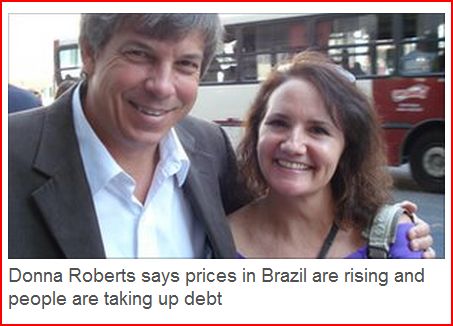 Brazil is used to sending thousands of immigrants to the United States.

Now the country sees many of them return, because the economic opportunities are now better at home.

Even some Americans are coming: During the first half of this year, more than 4,300 US citizens received working visas from Brazil’s Labour Ministry, up 20% on the first six months of 2010.

The US economy is still almost seven times as big as Brazil’s. Its gross domestic product per capita is four times higher than Brazil’s.

However, the US government was also hobbled by two expensive wars, a crisis in the housing market and soaring private and government debt. A recession pushed the unemployment rate to around 9%.

Brazil has gone in the opposite direction.

After years of stagnation, the country managed to tamp down both inflation and unemployment; its economy is now powered by a strong internal market.

She is a lawyer, and holds US citizenship. But after 20 years of living between New York and Hong Kong, she eventually returned to her home country in 2005, settling in Brazil’s commercial capital Sao Paulo.

“It was so sad when business just wouldn’t work out in New York,” says Ms Franco, who helps multinational companies do business in Brazil. “It began to make more sense to come (to Sao Paulo). I didn’t want to miss it.”

Trading placesThe US and Europe are “slowing down” – that was the conclusion of Jennifer Iverson. After living for years in England and Switzerland, in 2006 the 40-year-old American and her Italian husband decided to move to Brazil.

“We noticed that we had to look at other options, and Brazil was suddenly attractive”, says Ms Iverson, who now works as a management consultant for local non-governmental organisations. Every time she goes home to the US, her friends give her the same advice: stay where you are.

“It’s almost as if the US and Brazil had traded places. Here there is a growing middle class, whereas the US middle class, the engine of the economy, can’t pay the bills at the end of the month,” says Ms Iverson. “It’s the difference between a stagnating economy and an economy that is full of energy.”

Rubens Barbosa, Brazil’s ambassador to the United States between 1999 and 2004, believes that his country’s rising geopolitical and economical importance has changed perceptions in Washington.

“The US State Department used to see Latin America through Mexico or Cuba. Now I’m surprised by the fact that their business attache has lived in Sao Paulo and that everyone in the US Embassy (in Brazil) speaks Portuguese. Their interest has changed.”

Mr Barbosa rejects suggestions that the US has had a lost decade, but points to changes after 9/11.

“US public expenditure increased, while revenues decreased because of changes in taxes. 9/11 had a huge impact on the economy and the [American] psyche. They were in an excellent situation, people were spending a lot. Then all of a sudden you had the housing problems, the derivatives problems.”

A ‘trap’ for Brazil?Jason Bermingham has lived through this change of fortunes. The 42-year-old American has lived in Brazil for 15 years. “My generation [in the US] was used to having an easy access to things. Many of my friends bought lots of nice stuff right from the start and got into debts.”

Ten years ago, Mr Bermingham thought about leaving Brazil. “But I sensed things were getting better and I saw the possibilities.”

He owns a sound studio in Sao Paulo, where he and his Brazilian wife record voice-overs in English and Portuguese for corporate videos. “It’s one of those less obvious careers that you find more and more here in Brazil. It would be silly to leave the country before [the Olympic games of] 2016.”

But Mr Bermingham worries that Brazilians could fall into the same “trap” as his fellow Americans. Consumption is growing; inflation is on the rise. “Brazil is euphoric,” he says. “I’m not an economist, but I see prices are doubling.”

High prices also worry environmentalist Donna Roberts, who came to Brazil in search of a “more sustainable” life. Ms Roberts and her family live in an apartment in Sao Paulo, smaller than the house she had in Florida, and got rid of their car. Their “carbon footprint” is much smaller now.

“But prices are rising and people are getting more credit lines, so if they are not careful the same thing [that happened in the US] could happen here,” she says.

She points out one key difference, though: “The US always find itself in a war situation, which uses up money that could be spent on social services.”

“It was much easier to get credit in the US”, he says. “In Brazil, the limit to which people can get into debt is much smaller.”